The Morris Arboretum Urban Forestry Consultants recently inspected a tulip-tree (Liriodendron tulipifera) at the historic Anglecot property in Chestnut Hill, Philadelphia. The consultants first assessed this tree in 2009, after a resident expressed concern about a large cavity at the tree’s base.

The mature tree measured 235’’ in circumference at 2’ above the ground, and was roughly 100’ tall. We estimated the age to be upwards of 130 years old, meaning that it may be one of the original landscape trees planted on the property when it was built in 1883. Because of its impressive size, the tree could strike the nearest building or land on Stenton Avenue if it failed at the base.

The cavity is located at the very base of the trunk and appeared to be quite extensive. We measured its size (Photo 1, below) and compared it to our 2009 measurement. In those 13 years, the cavity has grown 9” wider and 14” taller (Photo 2, below). 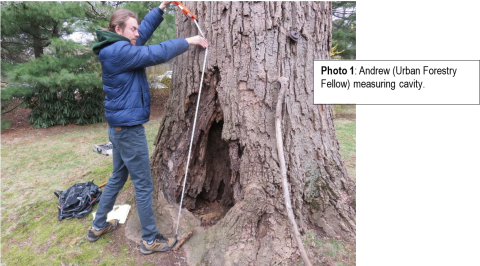 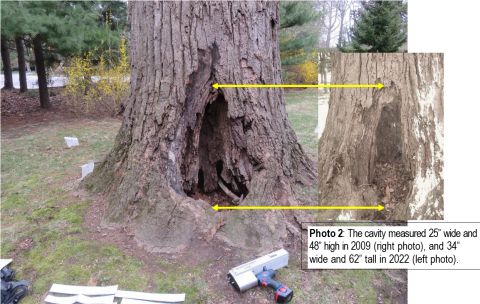 We used a stick to probe the extent of decay within the cavity (photo 3), and found that the decay extended throughout the majority of the base. A new vertical crack above the cavity was also observed, which was absent in our 2009 analysis.

You may be wondering if there is anything we can do to save a tree in this condition. Can we chip away the decayed wood and fill it with concrete or foam? While this may seem like a good idea, it is unfortunately not very effective and may actually speed decay or damage the tree even further. Decay organisms like fungi will remain inside the cavity even if it’s filled, and filling the cavity creates a cool, damp, and dark environment in which fungi can thrive.

But how strong is the rest of the trunk? Is the wood sturdy enough to hold the tree upright for much longer? To answer those questions, we assessed the structural integrity of the remaining wood by using a resistance drill. As this drill penetrates the wood, it measures the resistive force that the wood exerts on the drill bit, and records those forces on a graph paper in real time (photo 4). If the wood is strong and free of decay, it will be more difficult for the bit to move through it (green areas on photo 4). If the wood is weak and decayed (or nonexistent), the drill will move through it very easily (red areas on photo 4). We gathered resistance drill data from six locations around the tree’s base. These graphs ultimately make it easier for us to assess wood strength in places we cannot see. 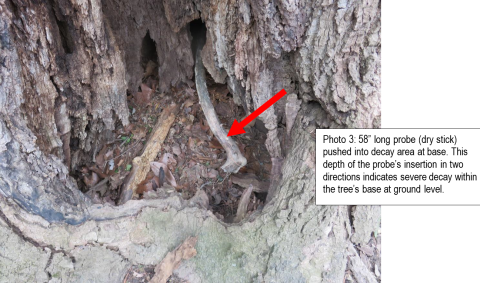 In 2009, the team conducted a similar analysis and ultimately recommended that the tree remain in place but be closely monitored. However, because the extent of decay in the cavity has grown quite substantially since then, we concluded that the tree is no longer structurally safe to be retained in the landscape. We recommended that this tree be topped to a standing snag of about 20’ and left as valuable habitat for wildlife. Numerous insects, birds and even bats will make this snag their home for as long as its left standing. Because the tree occupied such a large space, we recommended that two native canopy trees be planted to take its place, including another tulip-tree.

As a tree lover, it’s always tough to sentence a large tree to death. Whenever a tree like this is lost, it is important to plant at least one to replace it. Learn more about the Morris Arboretum Urban Forestry Consultants here.

Andrew Conboy received his bachelor’s degree in Environmental Science from Chestnut Hill College and his master's degree in Biology from Lehigh University. He is passionate about trees and plants and their potential for remediating environmental issues. He runs a local non-profit called Colonial Canopy Trees and enjoys creating educational video content focused on trees and environmental topics.